The royal dressmaker knows that there’s something about the Royal family that leaves us all so intrigued. Of course, what’s not to love about a royal family! Ever since Prince Harry’s engagement to Megan Markle, we’ve had Royal weddings on the brain. I don’t know about you, but I’m patiently (or impatiently) waiting to see what Megan’s wedding dress looks like. Naturally, we’re going to have to wait until the big day but to tide us all over I thought it would be fun to talk about what we do know about past Royal weddings and make some predictions for the big day.

The Royal family is known for staying true to their traditions, especially when it comes to a royal wedding. While Meghan Markle and Prince Harry have already shown their modern views, there are quite a few traditions we can expect to see throughout the royal event. Let’s face it, the wedding dress is always a big focal point during a royal wedding. Traditionally, every royal bride is to wear white on the day of her wedding. In addition to the color of her gown, it’s been a tradition for every bride’s bouquet to consist of myrtle. Myrtle may seem like a unique choice, but it’s chosen because it’s known as the “herb of love.” Of course, we can’t forget the tradition of each royal bride arriving to their wedding ceremony in a horse-drawn carriage. 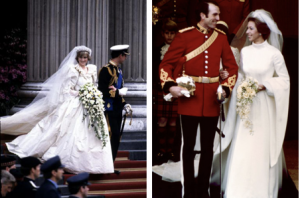 Sarah Burton of Alexander McQueen was the designer chosen to create Kate Middleton’s incredible wedding dress and while she hasn’t shared how long the entire design process took, we do know that all the lace throughout the dress was handmade by the Royal School of Needlework. It’s said that the team creating the lace were instructed to wash their hands and change needles consistently to avoid any discoloration on the lace. Sarah Burton has been well-known for quite some time in the fashion industry, after working alongside famed Alexander McQueen and taking over after his passing. Although, when Burton designed Kate’s royal wedding dress she quickly became a household name. Burton admits to being rather reserved when sharing details of her private client’s designs. Many individuals in the fashion and bridal industries credit Burton for bringing back long sleeve wedding dresses, since they hadn’t been a big trend prior to Kate’s iconic dress. 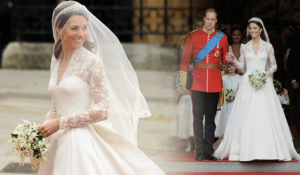 The Royal family is known for their ability to keep information under wraps until the day of a royal wedding, so unfortunately we’re going to have to wait to find out the REAL details behind Meghan’s dress. However, there have been a lot of rumors circulating throughout the news world about who the chosen designer will be. Traditionally, many Royal brides have chosen UK based fashion designers but we know Meghan is making her own stamp as she joins the royal family. Some sources have revealed Israeli designer Inbal Dror was asked to provide sketches, while some sources believe she may opt for a Canadian designer (source US Weekly). With so many incredibly talented designers to choose from I’m sure it’s going to be a tough decision for Meghan. However, Misha Nonoo is an incredibly successful designer and also the person who played matchmaker in introducing Prince Harry and Meghan. I think it would be an incredibly meaningful choice to choose Misha and Meghan has been spotted wearing a number of her designs.